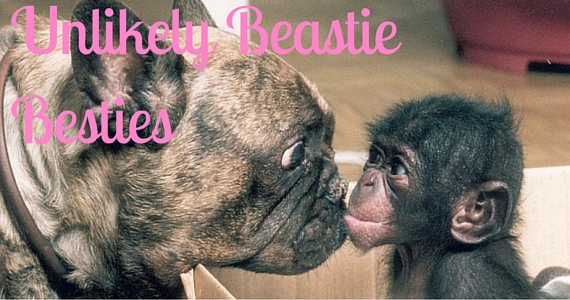 They say that love is blind and that must be the case if a doe-eyed baby kangaroo can adore a squinty-eyed, hairless wombat. Time and again unlikely beasties become besties, usually when the animals are raised together in captivity and often when one of them has been orphaned. We’ve put together a collection of the cutest and most bizarre interspecies friendships for your viewing pleasure. It’s your daily dose of animal cuteness!

Nigerian Dwarf goat, Princess Leiah, and chihuahua puppy, Lola aren’t kidding around. They’re smitten and play all day long at their Cumberland, Maine dairy farm. Click on the image to learn more about their story.

Anjana was 2 years old when 2 baby white tigers arrived at The Institute of Greatly Endangered and Rare Species (TIGERS) in South Carolina. Anjana became the surrogate mother to the pair of tigers, Mitra and Shiva, who were deliberately separated from their mother after their sanctuary was flooded by Hurricane Hannah. Anjana learned to nurture the cub s by copying the behaviour of keeper, China York at the institute. Click here to learn more about Anjana’s great caring skills. Never seen a great ape and a hunting dog in love before? Suryia the orangutan and Roscoe the dog met at the same reserve for wild endangered animals as Anjana and the baby white tigers, The Institute of Greatly Endangered and Rare Species, in South Carolina. Learn more about their adventures and their book Suryia and Roscoe here. Badgers are notoriously ill-tempered and mean but this baby otter and baby badger love to play together at the Secret World Wildlife Rescue in Somerset, England. Click here to learn more and to see videos of them frolicking.

These guys are both on the top of the food chain in their natural habitat but in this sanctuary they’re happy to cuddle all day. Baloo the American black bear and Shere Khan were discovered as cubs along with their brother Leo the lion by police officers in the basement of an Atlanta home during a drug raid. All three were in really rough shape from malnourishment and infection. The  trio were brought to Noah’s Ark animal sanctuary in Georgia where they have never been separated. They eat, sleep and play together in perfect harmony. They even groom each other! Click on the image below to learn more about BLT.

Dr. Paula Kahumbu’s wards Owen & Mzee couldn’t be more different but their odd friendship is definitely strong.  Owen, the baby hippo,  was stranded on a reef during the aftermath of a Indian Ocean Tsunami of 2004. The rest of his family had been washed out to sea. Once successfully rescued and released in Haller Park,  the orphaned little hippo baby ran and hid behind a 130-year old tortoise for protection just like he would hide behind his mother. The tortoise grew to love the little hippo until it came time for Owen to join other hippos. Click here to learn more about their story. 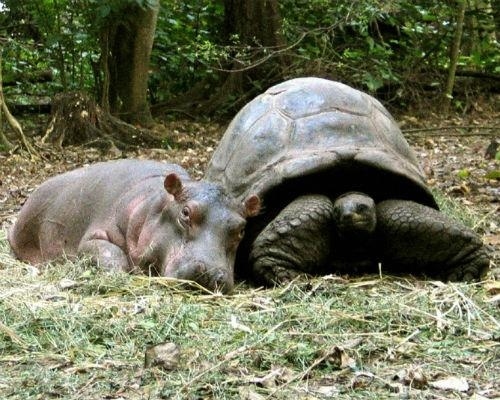 These beastie buds look like they’re howling with laughter. The Dalhaus family’s Jack Russell Terrier, Candy, immediately fell for Manni, the wild boar piglet the family had found starving in a field of southwest Germany. Click on the image below to read more. If there ever was an unlikely pair it would be these two but they’re inseparable. Bubbles, the African elephant, came to Myrtle Beach Safari in South Carolina as an orphan. Her family had been killed by ivory poachers. Bella, the black lab, was abandoned as a puppy at The Preserve and bonded with Bubbles over their shared love of the water. See more adorable photos of the two here. These cuddle bugs are having a hoot! Torque, the greyhound, is the adoptive dad of tiny baby owl Shrek. Shrek was taken from her mother when the keepers at the Outdoors Ringwood Rapture and Reptile Centre in Hampshire’s New Forest feared Sherk’s mother might eat her babies if she became stressed. Click on the image below to learn what these two love to watch on TV.

Dog is an ape’s best friend? Things did not look good for abandoned bonobo baby Kia until the Twycross Zoo director, Molly Malone, took Kia home to meet her pet French Bulldog, Bugsy. Bugsy immediately bonded with the little bonobo, providing the cuddles and kisses Kia needed to survive. Read more about these two in an excerpt from the book French Bulldog: The Frenchie. That tiny-eyed, hairless baby wombat has a face only a mother or a baby kangaroo could love? Wait a second! These two marsupials are so close they even share the same specially designed pouch at Wild about Wildlife Rescue Centre near Melbourne, Australia. Learn more about these strange bedfellows by clicking here.