Don’t Mess With These Moms! 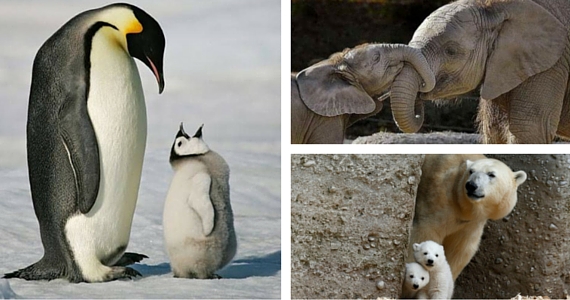 Mother’s Day is about a lot more than breakfast in bed and sending flowers. Moms everywhere are heroes and Mother’s Day is the day we worship them like they deserve! You don’t have to be human to be a kick-butt mom though. Here are 5 of the most marvelous moms in the Animal Kingdom.

A Momma Elephant will be pregnant for a ridiculous 22 months! Imagine nearly 2 years of swelling, aches, nausea and probably some weird cravings for tree branches and ice cream. If that wasn’t enough of a reason to make the list an elephant calf will nurse on milk for up to 6 years! Move over Dumbo, your mom is the real star!

They really should be called Empress Penguins because once an adorable little penguin chick hatches it’s work time for mom. She goes on an insane 74 mile journey to get food for her and her chick while her husband watches the kids. I’m all for take-out, but that’s a little ridiculous!

Koalas can spend as much as 22 hours a day sleeping, so they’re basically teenagers, don’t think they’re lazy though. When a koala is born it has no eyes, ears, or nose. It rests in a special pouch until they grow and then it stays on Momma Bear’s back for 6 months! She literally carries her family on her back which is why Koalas are one of the best mother’s in the world.

A cheetah mom will be looking after at least six cubs at any given time, and we all know how fast they can move! Can you imagine looking after 6 lightning-fast little ones? She must need eyes on the back, side and all-around her head to keep up! Super mom? I think so!